The Teutschhaus has been run by the Teutsch family for more than five generations. At the turn of the century, the inn with its own wine shop became a stately hotel with over 140 beds. The Hotel Teutschhaus is still a family business. The boss, Walter Teutsch is your competent Moho contact at our company and when it comes to motorcycle and GPS tours. Motorcycling is his passion: 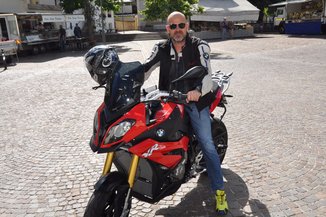 My father was already an enthusiastic motorcyclist and in the post-war years made 500 large parts of South Tyrol unsafe with his Motoguzzi.

The first trips with him on hardly paved roads and of course without a helmet were a special experience. The enthusiasm for motorcycling remains with me to this day. The first Honda in the 80s became a BMW GS. I am also the proud owner of a DKW from 1954.

In addition to work and family, I often do not have enough time for extended tours, but I know the most beautiful places, the most curvy routes and the most spectacular views in South Tyrol and Trentino.

In and around the Hotel Teutschhaus